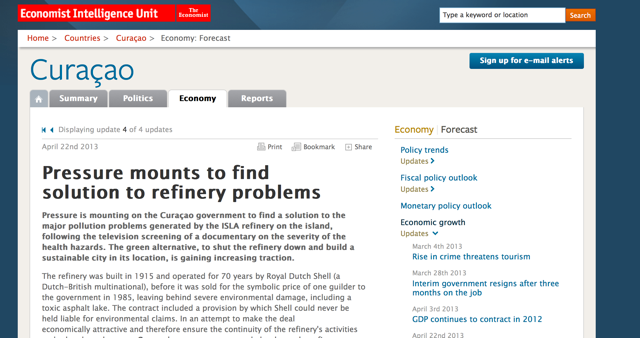 Pressure is mounting on the Curaçao government to find a solution to the major pollution problems generated by the ISLA refinery on the island, following the television screening of a documentary on the severity of the health hazards. The green alternative, to shut the refinery down and build a sustainable city in its location, is gaining increasing traction.


The refinery was built in 1915 and operated for 70 years by Royal Dutch Shell (a Dutch-British multinational), before it was sold for the symbolic price of one guilder to the government in 1985, leaving behind severe environmental damage, including a toxic asphalt lake. The contract included a provision by which Shell could never be held liable for environmental claims. In an attempt to make the deal economically attractive and therefore ensure the continuity of the refinery's activities and related employment, Curaçao's government proceeded to lease the refinery to Petróleos de Venezuela S.A. (PdVSA, the Venezuelan state-owned oil company) in 1986 for a very low annual fee of US$20m, while exempting the company from any tax obligation—the lease granted to PdVSA expires in 2019.

The smoke coming from the refinery, located in the middle of the island, has always been a cause of concern, but, over the years, the true extent of damage to the environment and the health hazard to the population have become increasingly clear. According to a report prepared by Dutch consultancy, ECORYS, for the Ministry of Economic Development of Curaçao, more than 18 people die each year as a direct result of the exhaust fumes, and many more suffer poor health. The air is contaminated with sulphur dioxide, nitrous oxide and small particles, resulting in lung diseases, cancer, acid rain and contaminated soil. Because of the emissions, schools are often forced to close.

Health research and reports have been largely ignored by the government so far. Despite the funding (around €500,000) given by The Netherlands since the island's independence in 2010, to set up an environmental police force, no such body has been created. Officially, the government gives "risk of job loss" as the main reason why they do not enforce pollution regulations. The refinery currently employs only 900 people, compared with 10,000 in the 1950s. Many politicians have worked for, or are still on the payroll of, the refinery, with little incentive to do anything to enforce regulations. The result is an impasse.

Since 2001 an activist group, Stichting Schoon Milieu Curaçao (SMOC, the foundation for a clean environment in Curaçao), has been trying to expose the extent of the pollution. SMOC forced the government to take regular measurements; however, there is no functioning authority to make sure the refinery complies with international maximum allowances. On March 21st a well-known Dutch TV programme, Zembla, aired a documentary, Stikken in het paradijs (Suffocating in Paradise), which exposed the extent of the damage the refinery has caused to the island and its people, while highlighting the inaction of the government.

Preparing for the future

Since the documentary, pressure from The Netherlands has been rising to make sure the refinery complies with the exhaust restrictions and environmental norms. That would mean a thorough and expensive refurbishment of the facility. Given that the end of the lease contract with Petróleos de Venezuela (PdVSA) is coming up in 2019 and that the company is probably unwilling to invest the huge amounts required to make the century-old refinery comply with environmental and health rules (or move the refinery to another location in the island), a scenario whereby the company leaves even before the end of its lease is becoming increasingly likely, leaving the 900 people employed in the refinery jobless. Venezuela's current political instability adds another element of uncertainty to the situation.

In 2011, an independent non-profit organisation, Fundashon GreenTown Curaçao, proposed an alternative to the refinery, which is now increasingly gaining momentum among politicians and the population at large. The proposal included dismantling the refinery, cleaning up the area and building a 600-ha sustainable city (called Green Town) based on multiple industries, with the creation of thousands of jobs in the maritime industry, marinas, shipbuilding, entertainment, real estate, fisheries, trade and retail business. The project is intended to generate significantly more income for the government and turn a polluted area into a clean environment. A market study by Royal Haskoning confirms these conclusions. According to Royal Haskoning, this new city could create 16,000 jobs and US$350m to US$1bn in additional GDP, with a total investment of under US$1.7bn (of which US$1.5bn should come from private investment).