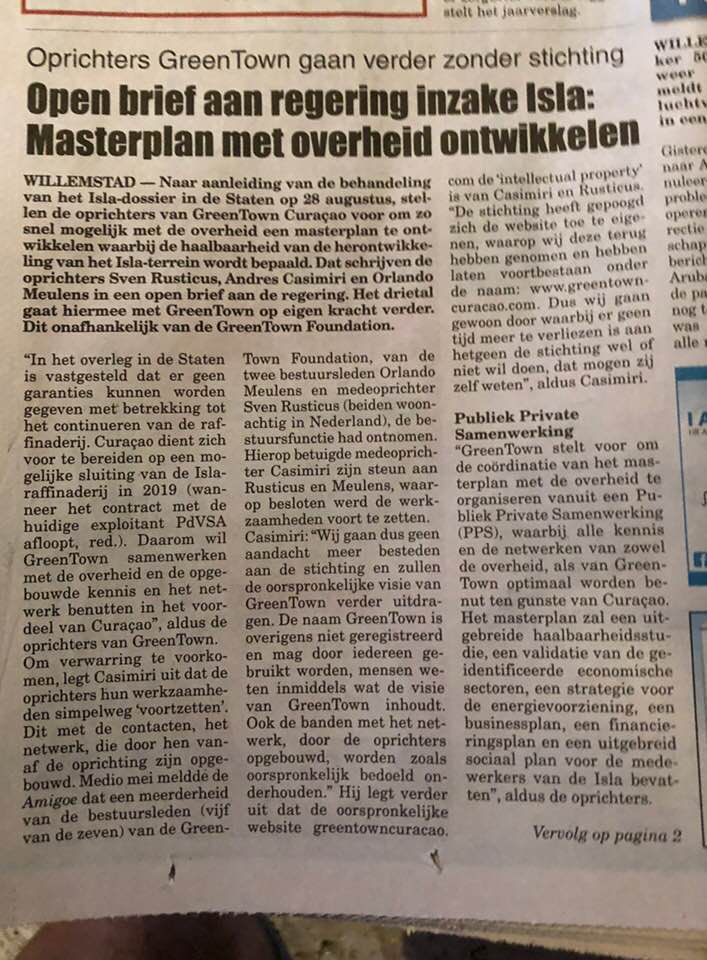 
GreenTown proposes to set-up a PPP

Following the treatment of the Isla dossier in the States of Curaçao on August 28th, the founders of GreenTown Curaçao propose to develop a Masterplan as quickly as possible with the government, determining the feasibility of the redevelopment of the Isla terrain. .

In the state consultation it has been established that no guarantees can be given with regard to the continuation of the refinery. Curaçao needs to prepare for a possible closure of the Isla refinery in 2019. That is why GreenTown wants to cooperate with the government and use its accumulated knowledge and network in favor of Curaçao.

GreenTown proposes to organize the coordination of the Masterplan with the government from a Public Private Partnership (PPP), in which all knowledge and the networks of both the government and GreenTown are optimally used in favor of Curaçao.

The Master Plan will contain an extensive feasibility study, a validation of the identified economic sectors, a strategy for the energy supply, a business plan, a financing plan and an extensive social plan for the employees of Isla.

GreenTown is convinced that a sustainable redevelopment of the Isla site, in which new economic activities are being developed, is more advantageous than continuing with oil refining. Instead of being dependent on the volatile and downward oil industry, GreenTown creates risk diversification. GreenTown creates new jobs in various sectors, including in the entertainment sector, creative sector, marinas, ship repair, free trade area, fishing, tourism, construction, real estate development and sustainable energy. These sectors must be carefully validated.

Over the past seven years, GreenTown has worked on its vision and has built up a large network of international experts, investors, companies, financing institutions and universities who are convinced that a sustainable course for Curaçao offers great economic opportunities and is also good for the environment. public health.

GreenTown therefore proposes to jointly set up a PPP, in which both the government and GreenTown sit and from where the development of the Master Plan can be coordinated. A PPP is a proven way for the business community and the government to work together; they are set up all over the world to solve issues similar to those of the Isla refinery.

The Rebel Group
The Rebel Group is an international company that specializes in Public Private Partnerships. Rebel Group organizes the financing of major infrastructure projects, knows GreenTown and has already provided advice.

The EIB
GreenTown has received support from the European Investment Bank, the EIB. This allows GreenTown to offer favorable loans to future investors and entrepreneurs. The EIB supports the GreenTown vision because it reduces CO2, improves social cohesion and stimulates extra economic development.

AECOM
AECOM is a large and renowned project and engineering firm in the United States and an important consultant to GreenTown. AECOM wants to contribute to the realization of GreenTown.

Local investor and entrepreneurs
A number of local entrepreneurs are interested in the exploitation of parts of GreenTown. Their vision and opinion are essential and valuable.

Universities
The Massachusetts Institute of Technology, the Delft University of Technology and the Erasmus University Rotterdam see GreenTown a progressive project in which the latest innovations can be applied, in collaboration with the University of Curaçao.

attachment: photo of Andres Casimiri and Orlando Meulens in consultation with a number of advisors