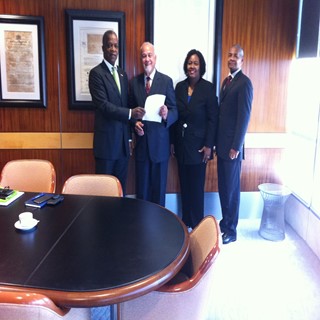 WILLEMSTAD - The European Investment Bank (EIB) has, in a so-called 'Letter of Support' expressed clearly to support the plans of the GreenTown Curaçao Foundation to redevelop the refinery site and harbor as soon as in 2019 expires the lease of the Isla refinery. This plan will require a significant investment. After having reviewed the plans the EIB announced to be willing to contribute to GreenTown Curaçao substantially.

GreenTown Curaçao is an environmentally friendly initiative with a mission. GreenTown wants to replace the heavily polluting oil refinery on Curaçao with a lively, green and vibrant city district around the harbor, generating more than 16,000 new jobs, a significant increase in government revenues and be powered solely with sustainable energy. In the future, this new city will provide tens of thousands of people with the opportunity to find clean and sustainable jobs and housing.

The refinery is owned by the state-run enterprise Refineria di Kòrsou, and operated under lease by Petróleos de Venezuela S.A. (PDVSA) until 2019, but neither have identified a third investor to provide the $3 billion needed to modernize the 100-year-old decaying refinery.

While the vast majority of EIB’s financing is through loans, they also offer guarantees, microfinance, and equity investment. EIB support will also help unlock financing from other sources, particularly from the EU budget. These sources will be combined with private investment to form the full financing package. EIB also provides borrowers with administrative and project management assistance, which facilitates the investment of funds to implement the project. We emphatically like to reiterate that NO government funds are needed to build GreenTown.

The EIB supports projects that make a significant contribution to growth, employment, and environmental sustainability, as well as social and economic cohesion in Europe and beyond its borders.

EIB  priorities, as defined in their Operational Plan, are:

·         Addressing economic and social imbalances between the regions (cohesion)

·         Protecting and improving the natural and urban environment (environmental sustainability)

All of the projects that the EIB finances must not only be financially viable, but also comply with strict economic, technical, environmental, and social standards. EIB’s corps of 300 engineers and economists screen every project, before, during, and after they finance the project

In June of this year, EIB in Luxembourg reviewed the plans for GreenTown Curaçao in detail with, which has resulted in receiving their Letter of Support for the project today. This demonstrates that GreenTown Curaçao has met their strict criteria. We cannot think of a better institution than the European International Bank to lend a hand in helping make GreenTown a reality.